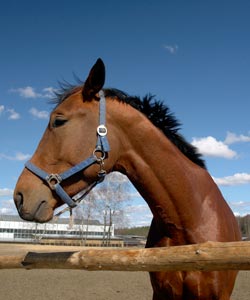 West Nile virus (WNv) is a mosquito-borne virus that was first detected in the United States in 1999 and reached Washington State in 2002. However, there was not another confirmed WNv case until 2005. From 2002 through 2017 there have been 212 known/confirmed infections of WNv in horses or other mammals.

If you would like to learn more about mosquito borne illnesses for different states, counties, years and diseases, then the USGS (United States Geological Society) has a great, interactive map.  Please click here to be directed to the map.  Once there you can change the host, disease, year and state by clicking boxes or selecting from dropdowns found near the top of the map.

Mosquitoes become infected by feeding on infected birds and pass the virus to other birds, animals and people. Both horses and people are considered 'dead-end' hosts; meaning that while infected, they do not spread the infections. Infected horses are not a risk to other horses. However, West Nile virus should be considered a serious threat. The virus normally causes mild symptoms, but it can cause encephalitis; an inflammation of the brain and central nervous system.

Death occurs in about 30% of clinically affected equine. Most surviving animals recover completely, but some may show lasting neurological effects. Horses showing any suspicious signs should be evaluated by a veterinarian for an accurate diagnosis.

There are licensed vaccines to protect horses, mules, donkeys and other equine against West Nile virus. Vaccinations are the primary protection for this serious disease. The vaccinations require two doses, four to seven weeks apart. Depending on the vaccine used, immunity may not be achieved for at least eight weeks after the second dose. The vaccination process should begin in the spring during the early part of the mosquito season. Work with your veterinarian to develop the best plan for your horse or other equine.

Horse owners are encouraged to contact their veterinarian if their animals display signs of illness including loss of appetite, fever, tremors, weakness, or inability to stand. Veterinarians are required to report all cases of equine encephalitis. Any suspected cases of West Nile virus in horses or other equines must be reported to WSDA; Washington State Department of Agriculture.