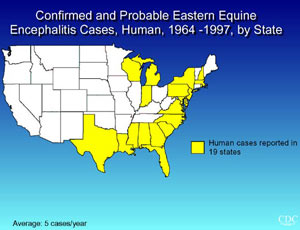 Eastern Equine Encephalitis (EEE) is a mosquito-borne viral disease. As the name suggests, EEE occurs in the eastern half of the US. Because of the high case fatality rate, it is regarded as one of the more serious mosquito-borne diseases in the United States.

TRANSMISSION: What is the EEE transmission cycle? How do people become infected with EEE virus?

HUMAN CLINICAL FEATURES: What type of illness can occur?

INCIDENCE: How many and where have human disease cases occurred?

RISK GROUPS: Who is at risk for developing EEE?

PREVENTION: How can people avoid infection with EEE virus?

SURVEILLANCE: How is EEE monitored?