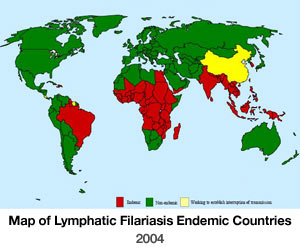 Q. What is lymphatic filariasis?

A. Lymphatic filariasis is a parasitic disease caused by microscopic, thread-like worms. The adult worms only live in the human lymph system. The lymph system maintains the body's fluid balance and fights infections.

Lymphatic filariasis affects over 120 million people in 80 countries throughout the tropics and sub-tropics of Asia, Africa, the Western Pacific, and parts of the Caribbean and South America. You cannot get infected with the worms in the United States.

Q. How is lymphatic filariasis spread?

A. The disease spreads from person to person by mosquito bites. When a mosquito bites a person who has lymphatic filariasis, microscopic worms circulating in the person's blood enter and infect the mosquito. People get lymphatic filariasis from the bite of an infected mosquito. The microscopic worms pass from the mosquito through the skin, and travel to the lymph vessels. In the lymph vessels they grow into adults. An adult worm lives for about 5-7 years. The adult worms mate and release millions of microscopic worms into the blood. People with the worms in their blood can give the infection to others through mosquitoes.

Q. Who is at risk for infection?

A. Many mosquito bites over several months to years are needed to get lymphatic filariasis. People living for a long time in tropical or sub-tropical areas where the disease is common are at the greatest risk for infection. Short-term tourists have a very low risk. An infection will show up on a blood test.

Q. What are the symptoms of lymphatic filariasis?

A. At first, most people don't know they have lymphatic filariasis. They usually don't feel any symptoms until after the adult worms die. The disease usually is not life threatening, but it can permanently damage the lymph system and kidneys. Because the lymph system does not work right, fluid collects and causes swelling in the arms, breasts, and legs. The name for this swelling is lymphedema (limf-ah-DE-ma). For men, the genital area also becomes swollen, a condition known as hydrocele. The entire leg, arm, or genital area may swell to several times its normal size. Also, the swelling and the decreased function of the lymph system make it difficult for the body to fight germs and infections. These people will have more bacterial infections in the skin and lymph system. This causes hardening and thickening of the skin, which is called elephantiasis (el-ah-fan-TIE-ah-sis).

Q. What is the impact of this disease?

A. Lymphatic filariasis is a leading cause of permanent and long-term disability worldwide. People with the disease can suffer pain, disfigurement, and sexual disability. Communities frequently shun women and men disfigured by the disease. Many women with visible signs of the disease will never marry, or their spouses and families will reject them. Affected people frequently are unable to work because of their disability. This hurts their families and their communities. Poor sanitation in tropical and subtropical areas of the world, where the disease is common, has created more places for mosquitoes to breed and has led to more people becoming infected.

Q. How can I prevent infection?

A. Prevention includes giving entire communities medicine that kills the microscopic worms and controlling mosquitoes. Avoiding mosquito bites is another form of prevention. The mosquitoes that carry the microscopic worms usually bite between the hours of dusk and dawn. If you live in an area with lymphatic filariasis you can reduce your risk of infection by sleeping under a mosquito net and using mosquito repellent on exposed skin between dusk and dawn

Q. What is the treatment for lymphatic filariasis?

A. People infected with adult worms can take a yearly dose of medicine that kills the microscopic worms circulating in the blood. While this does not kill the adult worms, it does prevent infected people from giving the disease to someone else. Even after the adult worms die, lymphedema can develop. To prevent the lymphedema from getting worse by getting care from lymphedema therapist and by following several basic principles:

• Carefully wash the swollen area with soap and water every day