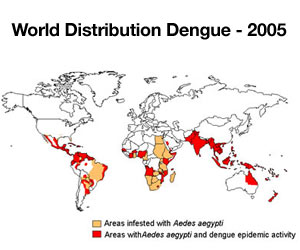 Q. What is dengue?

A. Dengue (pronounced den' gee) is a disease caused by any one of four closely related viruses (DEN-1, DEN-2, DEN-3, or DEN-4). The viruses are transmitted to humans by the bite of an infected mosquito. In the Western Hemisphere, the Aedes aegypti mosquito is the most important transmitter or vector of dengue viruses, although a 2001 outbreak in Hawaii was transmitted by Aedes albopictus. It is estimated that there are over 100 million cases of dengue worldwide each year.

A. DHF is a more severe form of dengue. It can be fatal if unrecognized and not properly treated. DHF is caused by infection with the same viruses that cause dengue. With good medical management, mortality due to DHF can be less than 1%.

Q. How are dengue and dengue hemorrhagic fever (DHF) spread?

A. Dengue is transmitted to people by the bite of an Aedes mosquito that is infected with a dengue virus. The mosquito becomes infected with dengue virus when it bites a person who has dengue or DHF and after about a week can transmit the virus while biting a healthy person. Dengue cannot be spread directly from person to person.

Q. What are the symptoms of the disease?

A. The principal symptoms of dengue are high fever, severe headache, backache, joint pains, nausea and vomiting, eye pain, and rash. Generally, younger children have a milder illness than older children and adults. Dengue hemorrhagic fever is characterized by a fever that lasts from 2 to 7 days, with general signs and symptoms that could occur with many other illnesses (e.g., nausea, vomiting, abdominal pain, and headache). This stage is followed by hemorrhagic manifestations, tendency to bruise easily or other types of skin hemorrhages, bleeding nose or gums, and possibly internal bleeding. The smallest blood vessels (capillaries) become excessively permeable (“leaky”), allowing the fluid component to escape from the blood vessels. This may lead to failure of the circulatory system and shock, followed by death, if circulatory failure is not corrected.

Q. What is the treatment for dengue?

A. There is no specific medication for treatment of a dengue infection. Persons who think they have dengue should use analgesics (pain relievers) with acetaminophen and avoid those containing aspirin. They should also rest, drink plenty of fluids, and consult a physician.

Q. Is there an effective treatment for dengue hemorrhagic fever (DHF)?

A. As with dengue, there is no specific medication for DHF. It can however be effectively treated by fluid replacement therapy if an early clinical diagnosis is made. Hospitalization is frequently required in order to adequately manage DHF. Physicians who suspect that a patient has DHF may want to consult the Dengue Branch at CDC, for more information.

Q. Where can outbreaks of dengue occur?

A. Outbreaks of dengue occur primarily in areas where Aedes aegypti (sometimes also Aedes albopictus) mosquitoes live. This includes most tropical urban areas of the world. Dengue viruses may be introduced into areas by travelers who become infected while visiting other areas of the tropics where dengue commonly exists. In the America region, all dengue virus serotypes are now present. DEN-3 was reintroduced into Central America in 1994 and is now found in several countries in the region. Since this serotype has been absent from the Americas for almost 20 years, the population has a low level of immunity and the virus is expected to spread rapidly.

Q. What can be done to reduce the risk of acquiring dengue?

A. There is no vaccine for preventing dengue. The best preventive measure for residents living in areas infested with Aedes aegypti is to eliminate the places where the mosquito lays her eggs, primarily artificial containers that hold water. Items that collect rainwater or are used to store water (for example, plastic containers, 55-gallon drums, buckets, or used automobile tires) should be covered or properly discarded. Pet and animal watering containers and vases with fresh flowers should be emptied and scoured at least once a week. This will eliminate the mosquito eggs and larvae and reduce the number of mosquitoes present in these areas. For travelers to areas with dengue, a well as people living in areas with dengue, the risk of being bitten by mosquitoes indoors is reduced by utilization of air conditioning or windows and doors that are screened. Proper application of mosquito repellents containing 20% to 30% DEET as the active ingredient on exposed skin and clothing decreases the risk of being bitten by mosquitoes. The risk of dengue infection for international travelers appears to be small, unless an epidemic is in progress.

Q. How can we prevent epidemics of dengue hemorrhagic fever (DHF)?

A. The emphasis for dengue prevention is on sustainable, community-based, integrated mosquito control, with limited reliance on insecticides (chemical larvicides and adulticides). Preventing epidemic disease requires a coordinated community effort to increase awareness about dengue/DHF, how to recognize it, and how to control the mosquito that transmits it. Residents are responsible for keeping their yards and patios free of sites where mosquitoes can be produced.