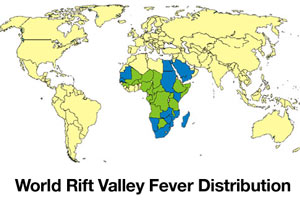 Q. What is Rift Valley fever?

A. Rift Valley fever (RVF) is an acute, fever-causing viral disease that affects domestic animals (such as cattle, buffalo, sheep, goats, and camels) and humans. RVF is most commonly associated with mosquito-borne epidemics during years of unusually heavy rainfall.

The disease is caused by the RVF virus, a member of the genus Phlebovirus in the family Bunyaviridae. The disease was first reported among livestock by veterinary officers in Kenya in the early 1900s.

A. RVF is generally found in regions of eastern and southern Africa where sheep and cattle are raised, but the virus also exists in most countries of sub-Saharan Africa and in Madagascar. In September 2000, a RVF outbreak was reported in Saudi Arabia and subsequently Yemen. These cases represent the first Rift Valley fever cases identified outside Africa.

RVF virus primarily affects livestock and can cause disease in a large number of domestic animals (this situation is referred to as an "epizootic"). The presence of an RVF epizootic can lead to an epidemic among humans who are exposed to diseased animals. The most notable epizootic of RVF, which occurred in Kenya in 1950-1951, resulted in the death of an estimated 100,000 sheep. In 1977, the virus was detected in Egypt (probably exported there in infected domestic animals from Sudan) and caused a large outbreak of RVF among animals and humans. The first epidemic of RVF in West Africa was reported in 1987 and was linked to construction of the Senegal River Project. The project caused flooding in the lower Senegal River area and altered interactions between animals and humans resulting in transmission of the RVF virus to humans.

Q. How is RVF virus spread among animals?

A. An epizootic of RVF is generally observed during years in which unusually heavy rainfall and localized flooding occur. The excessive rainfall allows mosquito eggs, usually of the genus Aedes, to hatch. The mosquito eggs are naturally infected with the RVF virus, and the resulting mosquitoes transfer the virus to the livestock on which they feed. Once the livestock is infected, other species of mosquitoes can become infected from the animals and can spread the disease. In addition, it is possible that the virus can be transmitted by other biting insects.

Q. How do humans get RVF?

A. Humans can get RVF as a result of bites from mosquitoes and possibly other bloodsucking insects that serve as vectors. Humans can also get the disease if they are exposed to either the blood or other body fluids of infected animals. This exposure can result from the slaughtering or handling of infected animals or by touching contaminated meat during the preparation of food. Infection through aerosol transmission of RVF virus has resulted from contact with laboratory specimens containing the virus.

Q. What are the symptoms of RVF?

A. RVF virus can cause several different disease syndromes. People with RVF typically have either no symptoms or a mild illness associated with fever and liver abnormalities. However, in some patients the illness can progress to hemorrhagic fever (which can lead to shock or hemorrhage), encephalitis (inflammation of the brain, which can lead to headaches, coma, or seizures), or ocular disease (diseases affecting the eye). Patients who become ill usually experience fever, generalized weakness, back pain, dizziness, and extreme weight loss at the onset of the illness. Typically, patients recover within two days to one week after onset of illness.

Q. Are there complications after recovery?

A. The most common complication associated with RVF is inflammation of the retina (a structure connecting the nerves of the eye to the brain). As a result, approximately 1% - 10% of affected patients may have some permanent vision loss.

Q. Is the disease ever fatal?

A. Approximately 1% of humans that become infected with RVF die of the disease. Case-fatality proportions are significantly higher for infected animals. The most severe impact is observed in pregnant livestock infected with RVF, which results in abortion of virtually 100% of fetuses.

Q. How is RVF treated?

A. There is no established course of treatment for patients infected with RVF virus. However, studies in monkeys and other animals have shown promise for ribavirin, an antiviral drug, for future use in humans. Additional studies suggest that interferon, immune modulators, and convalescent-phase plasma may also help in the treatment of patients with RVF.

Q. Who is at risk for the illness?

A. Studies have shown that sleeping outdoors at night in geographical regions where outbreaks occur could be a risk factor for exposure to mosquito and other insect vectors. Animal herdsmen, abattoir workers, and other individuals who work with animals in RVF-endemic areas (areas where the virus is present) have an increased risk for infection. Persons in high-risk professions, such as veterinarians and slaughterhouse workers, have an increased chance of contracting the virus from an infected animal. International travelers increase their chances of getting the disease when they visit RVF-endemic locations during periods when sporadic cases or epidemics are occurring.

Q. How is RVF prevented?

A. A person's chances of becoming infected can be reduced by taking measures to decrease contact with mosquitoes and other bloodsucking insects through the use of mosquito repellents and bednets. Avoiding exposure to blood or tissues of animals that may potentially be infected is an important protective measure for persons working with animals in RVF-endemic areas.

Q. What needs to be done to address the threat of RVF?

A. A number of challenges remain for the control and prevention of RVF. Knowledge regarding how the virus is transmitted among mosquitoes and the role of vertebrates in propagating the virus must be answered to predict and control future outbreaks of RVF. Vaccines for veterinary use are available, but they can cause birth defects and abortions in sheep and induce only low-level protection in cattle. The human live attenuated vaccine, MP-12, has demonstrated promising results in laboratory trials in domestic animals, but more research will be needed before the vaccine can be used in the field. In addition, surveillance (close monitoring for RVF infection in animal and human populations) is essential to learning more about how RVF virus infection is transmitted and to formulate effective measures for reducing the number of infections.