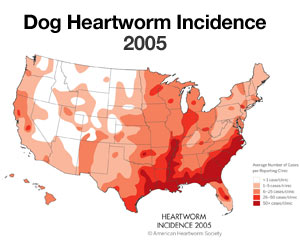 Since the first diagnosis of canine heartworm disease over one hundred years ago, heartworm infection has been widely recognized throughout the world as one of the major health problems affecting pets today.

Heartworm infection is caused by worms (Dirofilaria immitis) that may grow to be 14-inch-long adults. These adult worms live in the right side of the heart and the arteries of the lungs. Heartworm infection can cause serious damage to these arteries, eventually leading to heart failure, and in severe cases, damage to other organs such as the liver and kidneys. Dogs of any age and breed are susceptible to contracting heartworm disease.

While cats appear to be more resistant to heartworm infection than dogs, with fewer worms surviving into adulthood, they are still susceptible to infection and can also suffer from the effects of heartworm disease. However, they do not contribute significantly to spreading the infection.

Although the risk of heartworm infection varies from state-to-state, heartworm disease has been identified in all of the contiguous 48 states and Hawaii.

Heartworm infection is spread from animal to animal by mosquitoes. Dogs, cats, ferrets, coyotes, foxes, wolves, sea lions and even humans have all been found to be infected by heartworm. Adult female heartworms release their young, called microfilariae, into the animal's bloodstream. Mosquitoes then become infected with microfilariae while taking a blood meal from an infected animal. During the next 10 to 14 days, the microfilariae mature to the infective larval stage within the mosquito. When the mosquito bites another dog, cat, or other susceptible animal, the infective larvae enter through the bite wound. In dogs, it then takes a little over six months for the infective larvae to mature into adult worms that may live for five to seven years in dogs. In cats, it takes about eight months to mature into adult worms that live from two to three years. Microfilariae cannot mature into adult heartworms without first passing through a mosquito.

For both dogs and cats, clinical signs of heartworm disease may not be recognized in the early stages, as heartworms tend to accumulate gradually over a period of months and sometimes years and repeated mosquito bites. In dogs, recently infected animals may exhibit no signs of the disease, while heavily infected animals may eventually show clinical signs, including mild, persistent cough, reluctance to move or exercise, tiredness after only moderate exercise, reduced appetite, and weight loss.

Severe cases of the disease in dogs may lead to heart failure, most often recognized by a 'swollen belly' caused by accumulation of fluid in the abdomen. 'Caval Syndrome,' a form of liver failure, is also a potential serious complication, causing dogs to become weak very rapidly and turning their urine dark brown. This is a life-threatening situation that prompts surgical removal of the worms.

Detection of heartworm infection in apparently healthy animals is usually made with blood tests for microfilariae or a heartworm substance called an 'antigen,' although neither test is consistently positive until about seven months after infection has occurred.

Diagnosis of heartworm infection may also be detected through x-ray and/or ultrasound images of the heart and lungs, although these tests are usually used in animals that are known to be infected.

In dogs, most cases of advanced heartworm disease can be successfully treated with a drug called an adulticide that is injected into the muscle. A series of injections are given to dogs who have received a thorough examination to assess the risk of the treatment. Hospitalization is usually recommended during treatment, but treatment can also be performed on an outpatient basis. During the duration of the recovery period lasting one to two months, it is essential that exercise for the pet be limited to leash walking, decreasing the risk of partial or complete blockage of blood flow through the lungs by dead worms.

Dogs in heart failure and those with caval syndrome (a form of liver failure) require special attention. Reinfection is prevented by administering a heartworm preventative. Some also eliminate microfilariae if they are present.

Currently, there are no products in the United States approved for the treatment of heartworm infection in cats. Cats have proven to be more resistant hosts to heartworm than dogs, and often appear to be able to rid themselves of infection spontaneously. In severe cases of the disease, veterinarians will treat an infected cat with supportive therapy measures.

In cats, there are three products currently approved to prevent heartworm infection, two oral and one topical medication. All three are virtually completely effective in preventing the development of adult heartworms when administered correctly.

Heartworm medications work by halting heartworm development before the adult worms reach the lungs and cause disease. Compared to the cost of treating an animal with mature adult heartworms, heartworm prevention is safe, easy and inexpensive.

Periodic retesting is important for monitoring the success of any heartworm prevention program. It is recommended that pet owners discuss with their veterinarian what testing procedures are appropriate for their pet.

Founded during the Heartworm Symposium of 1974, the American Heartworm Society was formed to facilitate and encourage the generation and dissemination of information about heartworm disease and encourage adoption of standardized procedures for its diagnosis, treatment and prevention. The Society stimulates and financially supports research, which furthers knowledge and understanding of the disease. Its headquarters is located in Batavia, Illinois.